Posted by Laurel on September 10, 2011
While I love homemade ice cream, I can never force myself to make a recipe that calls for 6 egg yolks, as so many of them do. It just seems extreme to me. We often have homemade ice cream at family celebrations and it is nearly always accompanying something else, so it doesn't make sense to have the ice cream alone be extra rich.

What follows is my go-to ice cream recipe for non-fruity applications. I found it on Chowhound years ago and someone said that it was the Quilted Giraffe cinnamon ice cream recipe. That means nothing to me, but it might ring a bell for someone else.

It's been so long since I copied the recipe from CH that I don't know if I messed with the cinnamon version much or not. I'm suspecting I did because the "heat the half and half to 175 degrees" has Cook's Illustrated written all over it.

I use the basic concept (custard, simple syrup, whipped cream) as the foundation for several different flavors: vanilla/toffee vanilla, coconut, coffee and, of course, cinnamon. While there is only one egg yolk in the recipe, I still find it luxurious in the mouth and not too icy. We rarely have leftovers, so the texture is at its peak when we eat it. But even a leftovers are amazingly silky. Two or three days after churning, I detect miniscule ice crystals, and yet I am still totally satisfied with the smoothness of this ice cream. I think this must be because of whipping the cream before churning. This strikes me as genius--you start out churning ahead of the game. I wonder if you might end up with chunks of butter in your ice cream if you over-whip the cream, so be sure not to do more than soft peaks.

I decided to see what would happen if I used coconut sugar (also called palm sugar) instead of my usual evaporated cane juice. Coconut sugar has a lower glycemic index than regular sugar and we've got a family member who is being careful about such things right now. "Blonde" coconut sugar looks much like light brown sugar and I thought that the combination with vanilla bean would be nice, as the plan is to use the ice cream alongside nectarine cobbler. I used the same amount of coconut sugar as I would evaporated cane juice. This turned out to be exactly right. The custard looks and tastes like toffee, as did the finished ice cream. Two days later it had even taken on some coffee notes, though I don't know why. The vanilla flavor is very subtle so you might wish to add some vanilla extract, as well.

I am considering some streamlining of the recipe (for example, why is the simple syrup necessary? Wouldn't the sugar dissolve in the half and half?). In 2019 I did just this and also reduced the quantities slightly because it was just overwhelming my 1.5 qt ice cream maker, especially if I wanted to do any mix-ins. In 2020, while watching my eldest make my chocolate pudding recipe, I thought “why am I using a double-boiler at all?” So as we were making the mint chocolate chip variation for the third time this summer (with 2 egg yolks), we dumped the dairy and sugar directly in the saucepan. No issues at all! I will never go back and am no longer showing the original method, just the original quantities in case others have larger ice cream makers.
INGREDIENTS (for any version)
3/4 c. sugar
2 c. half and half (or try whole milk mixed with some cream or by itself)
1-3 egg yolks (we had 3 leftover from making macarons so I used them all and it was fine)
1 c. heavy cream
Cinnamon--1  cinnamon stick or 1 tsp ground cinnamon; 3/4 tsp vanilla
Coffee--3/4 c. whole coffee beans
Coconut--1 to 1 1/2 c. shredded unsweetened coconut (ideally the big flakes), 1/2 tsp fresh lime juice (optional)
Vanilla/Toffee vanilla--1 vanilla bean, sliced lengthwise and seeds scraped out and added; for toffee vanilla, use coconut sugar or half white sugar (evap cane juice) half light brown sugar instead of all evaporated cane juice, 3/4 tsp vanilla extract (optional)
Stracciatella—melt 3 oz chocolate and add 1/2 TBSP neutral oil
Mint chocolate chip—add 3/4 tsp mint extract to the strained mixture when it’s cooling then follow the instructions for stracciatella 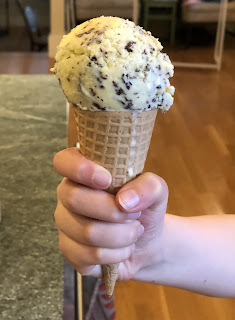 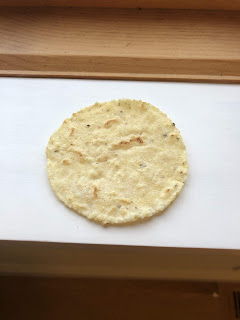 We are a corn tortilla-preferring family. While I don’t mind wheat tortillas, both of my kids really just don’t like them much. We always have storebought corn tortillas in the fridge. I’ve made my own a few times using dried masa harina, but I didn’t love the result enough to make it a regular thing. I also eat far fewer tortillas than the rest of the family and couldn’t muster up the energy to produce enough to replace storebought. But then a few things happened. First of all, I was reading the comments on the Rancho Gordo site for their white corn posole  and a commenter mentioned using it to make tortillas. I had never considered this before. I bought some posole and tucked the idea away into my brain where it sat for at least six months. And then Coronavirus lockdown happened. It took about two months but then I finally got enough energy to think about trying it. I was going to make some Pork and Hominy Soup  so decided to use dried hominy this time instead of canned and I set a